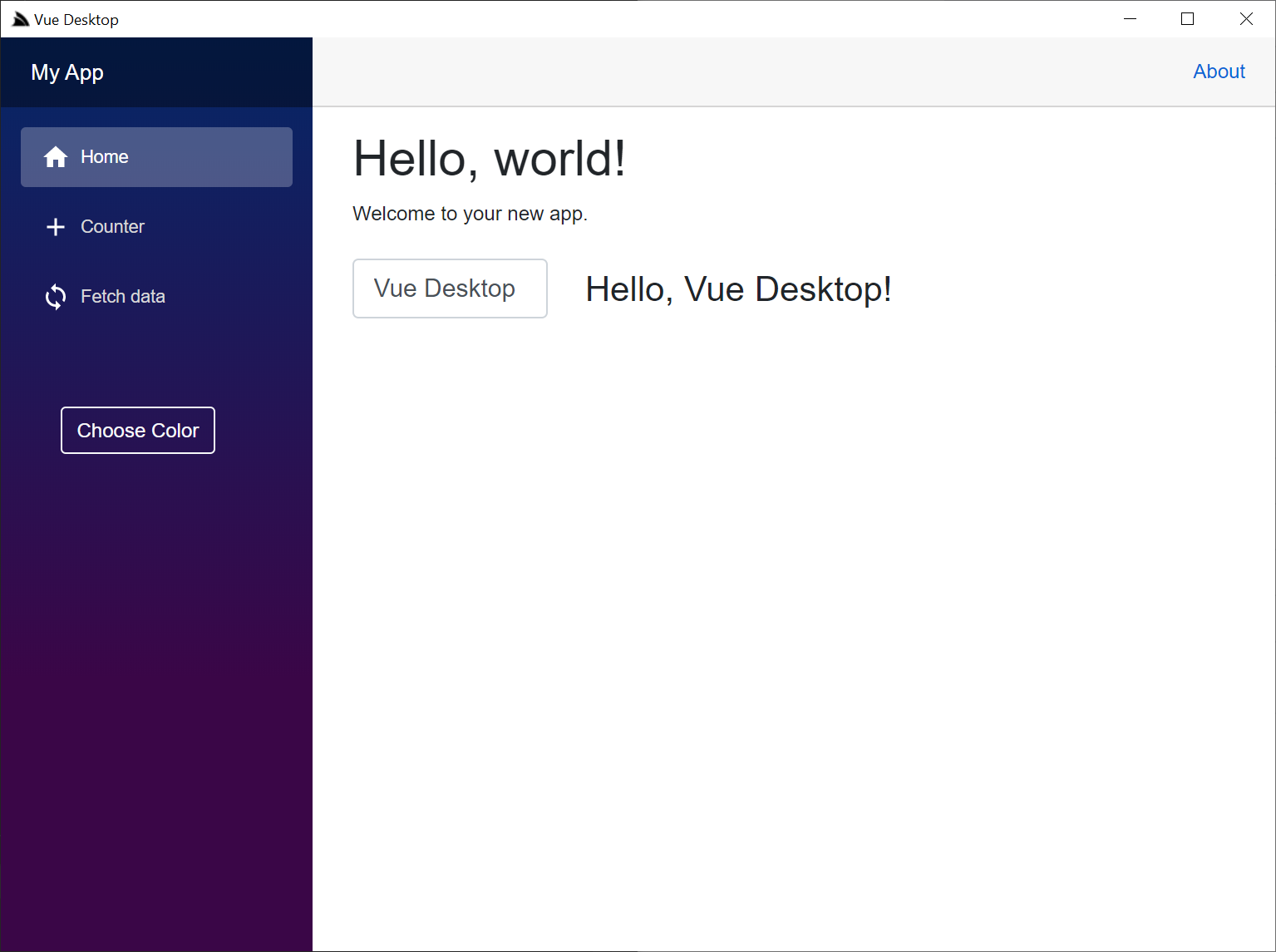 During development you can use the familiar & productive Web App development model by running TypeScript Watch and dotnet run in different terminals:

Then open the Web App in your preferred browser for a productive Live Reload workflow.

To run your app in a Desktop App locally, pack it then run it from the published dist/ folder:

Following VS Code frequent releases makes it clear why they’ve decided on developing it with Web Technologies using Electron where they’ve been able to iterate faster and ship new features at an unprecedented pace. In addition to its superior productivity, they’re able to effortlessly support multiple Operating Systems as well as enable reuse for running on the Web as done with its Monaco Editor powering VS Code as well as innovative online solutions like GitHub Code Spaces.

These attributes in addition to the amount of investment that major technology companies like Google, Apple, Microsoft & Firefox invest each year in improving Web & browser technologies will ensure the platform will be continually supported & improved unlike most Desktop UI Technologies.

What technology to use for Chromium Desktop Apps?

The latest solution for building Single Page Apps being promoted for .NET is https://blazor.net/ where for Client Apps suggests to use Blazor WASM which in an overview lets you run C# in the browser by running linked/tree-shaken .dll’s in interpreted mode by the dotnet runtime which is itself compiled & running as WASM. We can see a glimpse of this in action by viewing .dll’s being loaded in the JS Debug Inspector:

The main value proposition of Blazor appears to be running C# in the browser, which while a technically impressive feat, requires a tonne of complexity to achieve that results in worse end-user UX. It works using a development model based on Razor - a technology we’re not fond of due to its reliance on heavy/complicated tooling and should be noted that historically whenever .NET invented their own development model for the Web in ASP.NET Web Forms or Silverlight, they’ve ended up being abandoned.

Another reason we’re not fond of technologies like Blazor is from experience in having to support “crippled” .NET Runtimes on platforms where only a subset of functionality of .NET is available, where we’ve lost untold time & effort trying to diagnose & track down runtime issues in Windows Phone, Silverlight & Xamarin iOS due to platform restrictions (we’re already seeing reported in Blazor), differing implementation behavior or .NET libraries heavy use of reflection that’s problematic in AOT environments.

Even without the drawbacks, going against the momentum of established Web UI Technologies like Vue & React, their vibrant communities & awesome ecosystems in favor of an uncertain foreign development model reliant on heavy/complex tooling that only a single vendor can provide serving only a single language ecosystem just to be able to use C# in the browser isn’t a desirable goal as modern JS/TypeScript offer a more productive & enjoyable Reactive UI development model than any C#/XAML UI Framework we’ve used.

Ultimately as staunch enemy’s of complexity we’re philosophically against reliance on heavy complicated tooling and instead have adopted a Vue Chromium Desktop approach for the development of ServiceStack Studio - an App that wouldn’t have been feasible if needing to use any C# & XAML UI FX or WinForms historically used to develop .NET Desktop Apps.

But as it’s the latest technology developed & promoted by .NET PR it’s going to be the Web UI technology compared to most, so this project template is based on the UI of an empty Blazor WASM project, rewritten to use Vue SPA UI & a back-end .NET Core App. It’s an enhanced version that also includes examples of commonly useful features:

The first comparison is a direct result of the approaches used in each technology, where in addition to all your App’s assets Blazor WASM has to also bundle a dotnet WASM runtime & linked/tree-shaken .dll’s. Whilst app Desktop Apps is on opposite side of the spectrum where it only requires distribution of App-specific functionality as all popular Vue JS libraries, Bootstrap CSS, Material Design SVG icons or ServiceStack .dll’s used are pre-bundled with the global app dotnet tool.

For the comparison we ran the publish-app script & Blazor’s Publish to Folder tool & compared the .zip of each folder which resulted in: 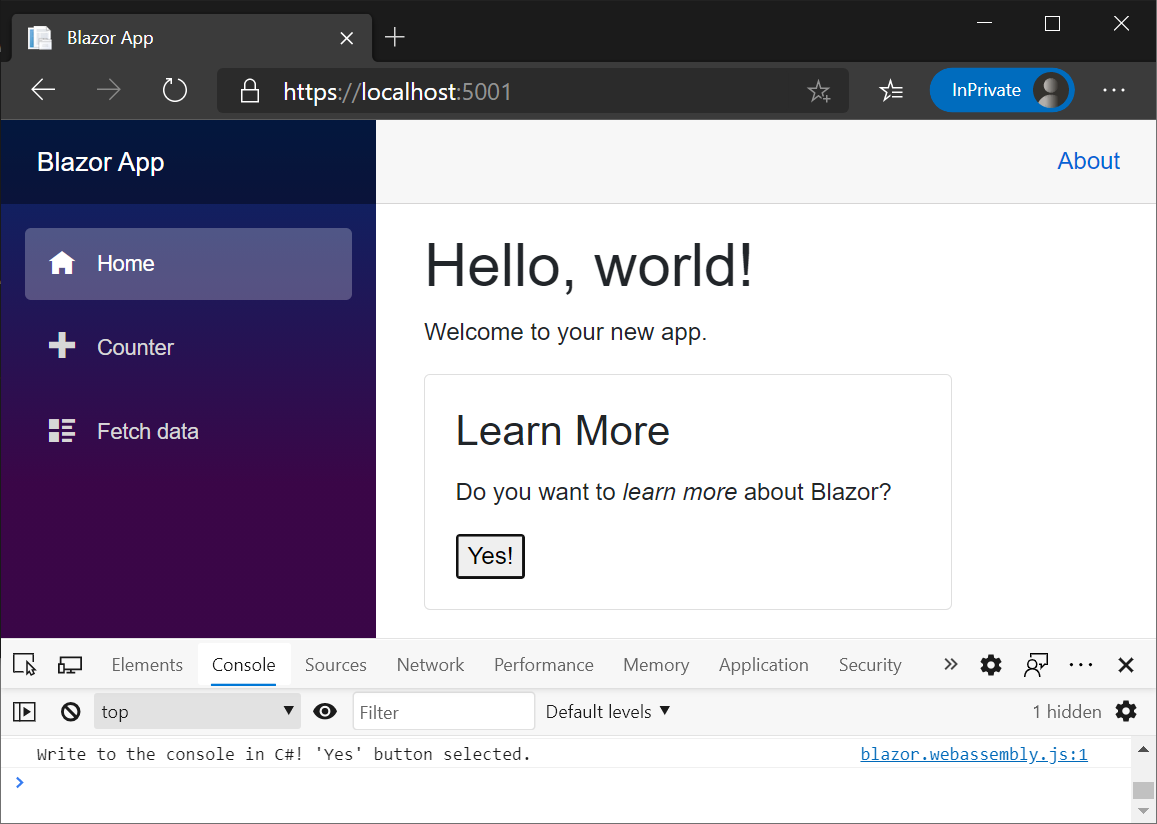 In addition, the app tool also bundles a Chromium Desktop App shell in order for your Vue Desktop Apps to appear like Native Desktop Apps, to get the same experience with Blazor WASM App you would also need to manage the installation of a Chromium wrapper like Chromely.

When App sizes are this small you have a lot more flexibility in how to distribute & manage the App, which is how Vue Desktop Apps can be published to Gists and always download & open the latest released version - enabling transparent updates by default.

A notable omission from a modern UI FX is there doesn’t to be any kind of Live Reload capability for any page, including static .html or .css resources.

This is a good example of why we prefer to avoid complex tooling as what’s normally a trivially implementable feature requires much more effort & time to implement when you’re reliant on a complex architecture & heavy tooling.

The only build tool required to enable Live Reload in Vue Desktop Apps is TypeScript’s watch feature which monitors and automatically transpiles all *.ts file changes:

The lack of a live reload feature is exacerbated when having to manually reload your App to view every change which has noticeable delay in Blazor WASM which is otherwise instant in a normal .NET Core Web App:

It’s opinionated in the shared libraries it includes, namely:

Intended for developing small/medium Desktop Apps that can be published to a GitHub Gist (or repo) & opened over a URL, e,g: Redis Admin UI, generic DB Viewer or our ServiceStack Studio API Management tool which all package down to small footprints.

Given you can build & distribute an App within minutes, it’s suitable for quick UI’s around a single purpose Task you may want to distribute internally, e.g. a dynamic reporting viewer, edit forms, surveys, email composer, or see the Desktop App Index for other examples.

All app and x dotnet tools used to run all Sharp and Gist Desktop Apps utilize an unrestricted suite of ServiceStack Software that can be developed & distributed for FREE!

We don’t recommend this template for flagships Desktop App worked on by large teams, in that case you’re better off building your own custom Chromium Desktop App bundle as Spotify does where you’re able to access full control over CEF APIs, it’s rendering, integration and Chromium features. If you’re looking looking to Chromotize a .NET Core Desktop App you can use our ServiceStack.CefGlue .NET Standard 2.0 NuGet package of the CefGlue C# CEF Bindings project.

If you’re not using .NET Core, Electron is the most likely best choice for building Desktop Apps with Web Technologies.

If you’d also want to develop native iOS / Android Apps from a shared code-base then Flutter Desktop is looking like the most promising technology under active development in that space.

Whilst this project template is intended for creating Desktop Apps, it’s essentially just a .NET Core Web App wrapped in a shared Chromium Desktop Shell which means it can also be deployed the same as any other .NET Core Web App by generating a published build:

Then copying the published release builds for Server deployments.