The lightweight footprint of Vue Desktop Apps allows for multiple deployment options, including:

Our recommendation is to publish Sharp Desktop Apps to Gists (as done with ServiceStack Studio) so they can be launched with the Custom URL Scheme:

Where it can be launched from a HTML <a/> link in a web page, directly in any browsers URL bar or File Explorer.

Where it downloads & extracts the latest Release .zip archive (or master if none), before running the app, so can take a little longer to launch for small Apps.

All apps run the latest version by default so it's always up-to-date, but you can speed up App launch times by running the last installed app using the app: Custom URL Scheme:

For Gist deployed Apps, it will run the last downloaded app or download & run the latest App gist if it's the first time it's run.

For GitHub repo Apps, you can download and install them locally with:

Where the downloaded version can be run using its <repo> name, e.g:

Both Gist and Desktop Apps can be uninstalled using app uninstall, e.g:

The app: URL Scheme is a convenient way to launch Apps if you already have a Browser or Windows File Explorer already open where you can quickly launch Apps by typing CTRL+L shortcut to go to the Command Bar then type app://<name> to launch your App.

This will create a Windows Shortcut for the App which can be copied to the Desktop or pinned to the Taskbar for easy access.

Publishing your App to a gist is our preferred option as you can use GitHub to host your App, built-in auto-updates with every each launch and if you publish to the Global App Registry users can download & install your App with a unique UX-friendly name like app://vuedesktop.

To create gists you'll need to generate a GitHub Access Token with gist scope and add it to your GITHUB_TOKEN Environment Variable (win, mac, linux). (alternative: use -token arg in each publish command)

Before publishing your App, its app.settings looks something like:

Publish to the Global App Registry #

To maximize reach and accessibility of your App you can publish it to our Global App Registry by including the following metadata about your App:

The appName is the globally unique short alias you want your App to be launched as, e.g:

If your app.settings contains the app metadata above, publishing the app will publish your App to a Gist & register your App's alias to the Global App Directory.

Now you can build, bundle and publish your App to a gist with its publish-app npm script:

That returns the gist URL your app was published to:

Which can now be opened via an URL scheme:

Or via the command line:

When your App is published the first time, the created gist URL will be saved in a local .publish text file & used for subsequent App publishes.

If the Gist App isn't published to the Global Registry, users can create their own UX-friendly local alias with:

Where they'll be able to use their alias instead of the Gist Id:

Publishing to a GitHub Repo #

The same /dist folder that's published to Gists can also be published to a GitHub Repo like github.com/mythz/vuedesktop which can be launched with the <user>/<repo> URL Scheme, e.g:

Or launched from the command-line:

Users can also download and run a local copy launched with a Windows Shortcut with this 1-liner:

This will download this repo and create a Vue Desktop Windows Shortcut you can use to launch this App: 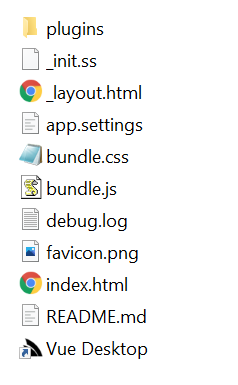 The /dist folder can also be zipped and distributed that way, by running:

In which case it can be extracted and launched by running the app command in the App's folder:

But if you're going to run from a local folder (where app:// isn't available), you'll likely want to create a Windows Shortcut:

That Users can copy to their Desktop or pin to their Taskbar for easy access.

By having the app tool installed, users benefit from ultra small (e.g. 15kb) downloads whose tiny footprints allows for auto-updating with each App launch so they have access to new features as soon as they're available. Users will also be able to update to the Chromium version used to run all their Sharp Desktop Apps by updating the app tool:

This will generate 2 files:

The *.zip contains both the /dist of your App and the app Chromium runtime as well as a convenience install.ps1 script that users can use to effortlessly install the App with the Win+R shortcut to bring up Windows Run dialog then pasting this powershell cmd-let with the URL of your install.ps1 script: 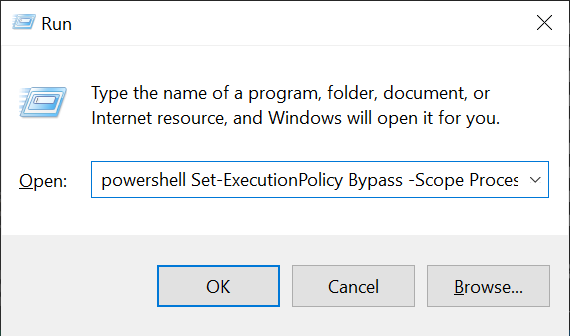 Here's a copy of install.ps1 which downloads and extracts the App to the Users LocalApp Data and copies the Shortcut to the Desktop. Before publishing you'll need to update $zipUrl to point to the URL with your *.zip:

Here's an example of an app we have published to our servers: